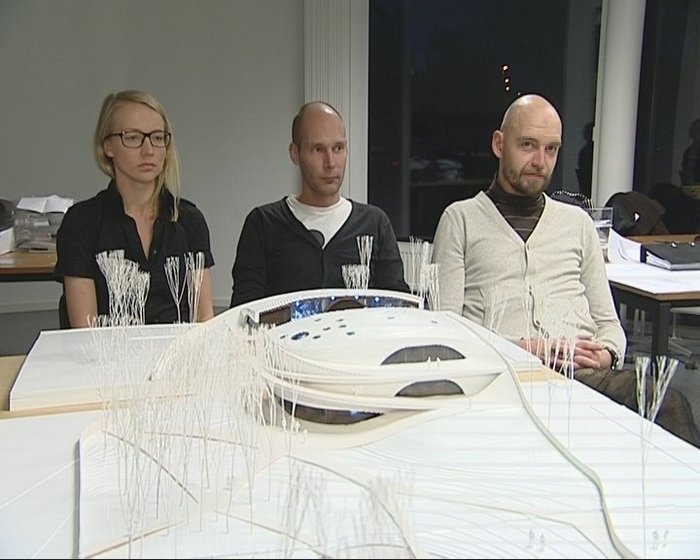 Salto Architects is a Tallinn based office founded in 2004.

Salto Architects is interested in the fascinating area between architecture, landscape design and art. By operating in the border areas of architecture we try to experiment with context; including also social and economical, and rethink our methods every time. Our designs range from installations that serve as architecture to buildings that become a new landscape, or architecture that can be used as an installation etc. Projects as diverse as ``Gas pipe`` installation at the 11th Venice Architecture Biennale, infrastructural project „Fast Track“ in Russian forest for architecture festival Archistoyane, and site-specific temporary straw theater for Tallinn Culture Capital of Europe 2011, to public building commissions are all treated as equal.

2008 Venice Architecture Biennale installation ``Gaspipe`` highlights the policital dimension in architecture and spatial dimension in politics. It was awarded the Estonian Cultural Endowment Art Prize as well as the Architecture Prize and it was presented by the New York Times and the Economist. The attention this project attracted among representatives of different fields testifies for the possibilities of interdisciplinarity and encourage to blur the borders between architecture and for example geopolitics.
A site-specific installation ``Fast Track`` in Russia in 2012 challenges the concept of infrastructure that only focuses on technical and functional aspects and tends to be ignorant of its surroundings. It is an attempt to create intelligent infrastructure that is emotional and corresponds to the local context. ``Fast Track`` was presented by the world ?s leading news agencies such as Bloomberg TV, ABC News, Deutche Welle, Guardian and was at the same time noticed by Saatchi gallery and also published in several technology magazines.

The Straw Theatre was a research-like project dealing with an extraordinary material in public space and negotiating for the missing laws and regulations for it. The process implicated the Tallinn City Government to modernize the law for temporary buildings and besides it recieved the Estonian Cultural Endowment Architecture Prize; was ranked highly commended in Culture category in the World Architecture Festival 2012 and was published in A+U and dozens of other publications from different fields of life.

During its nine-year practice, Salto has mainly focused on public buildings and other kinds of projects with a public dimension where interdisciplinary and critical approach has a major role. The design often comprises the whole landscape, critically positions itself towards its surroundings or brings out a new hierarchy and priorities. It forms a new environment questioning the preconceived notions of what is real and what is irrelevant regarding spatiality. It tries to use the spatial peculiarities or pragmatic technical issues as a material for creating new kind of quality space with clarity and intensity. For example Estonian Road Museum, Baltic Film and Media School and Sõmeru Community Centre which are also among the most critically acclaimed designs by Salto Architects.

Salto Architects have won prizes in about 50 architecture and art competitions and have been lecturing in several institutions in Europe and Russia. Salto Architects teach a studio in the Estonian Academy of Arts.